Aakhol Ghor, the Assamese Cuisines and Foods from Assam

Its all about Food and Food Habits from the land of blue hills and red river, Assam.

Aakhol Ghor means Kitchen in Assamese. Assamese traditional Kitchens normally has two parts. First the dining area plus a small cooking space for tea etc. And the next bigger and more functional room is the actual kitchen with at least two earthen fire places (chowka).If you are a food lover you can hope to see a lot of authentic Assamese Recipes in this place......

Some famous Chef of India once said, " India is so unique, one can find three different recipes for the same chicken curry in the three houses lined in the same row. Every kitchen and every cook in India has it's own cook book, unlike rest of the world."
I personally feel it is so well said. Even in my case, you might find small to big differences in your known method of cooking and the ones posted here. I call them true Assamese for two main reasons, one: because of the spices used, and two: my granny knew nothing beyond her village ( she did not believe that cauliflower can be green, which is Broccoli). So whatever she cooked was passed on over generation. And my Mom finds it hard to believe anything can be cooked beyond her traditional methods( she is best at it, though she makes excellent Indo - Chinese things, invented). So please feel free to put in your comments / correction. One thing I can assure is I have cooked all these ( everything) myself with my own hands at least once. So whatever is here is tried and tested. You are always welcome to do your bit of experiment !!!!!

I belong to Assam, where you could easily get fresh bamboo shoots and sometimes even dig them up oneself.
All bamboo shoots are toxic when raw. They contain hydrocyanic acid which in most countries is removed by boiling the bamboo shoots and then discarding the cooking water. The length of time required depends on the variety and the freshness of the bamboo shoots (the older they are, the more hydrocyanic acid is developed) and can be as little as ten minutes or as much as several hours.
As a rule of thumb, if you are buying whole raw bamboo shoots from a grocery store, they will be a type which requires less preparation time, and should be peeled, sliced then placed in cold water, brought to a boil, then drained with the water being discarded. Repeat three times, then cook as the recipe directs. Don't cook for too long after bringing to a boil each time, as the bamboo shoots will lose their crispness. I would personally feel a little unhappy about only soaking them without any cooking, as it is unlikely that you are going to have access to bamboo shoots of the same type and freshness.
However, once you've done this cooking process, don't worry about toxicity. After all, there are also plenty of other vegetables which are not okay to eat raw, but are perfectly fine once cooked (arbi springs to mind, for one), it's just that you are probably more used to cooking the others.
If you are in an Asian grocery in the US and they are selling bamboo shoots loose, they will be raw only if they are being sold whole and unpeeled, with all the outer layers of husk intact. If they are already peeled, sliced, and soaking in water, they have already been cooked and can be eaten as is.
If you are using canned, a very brief blanch in boiling water should help remove any unpleasant taste from the cans. 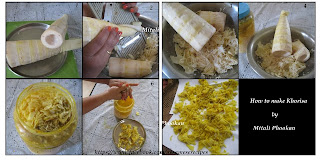